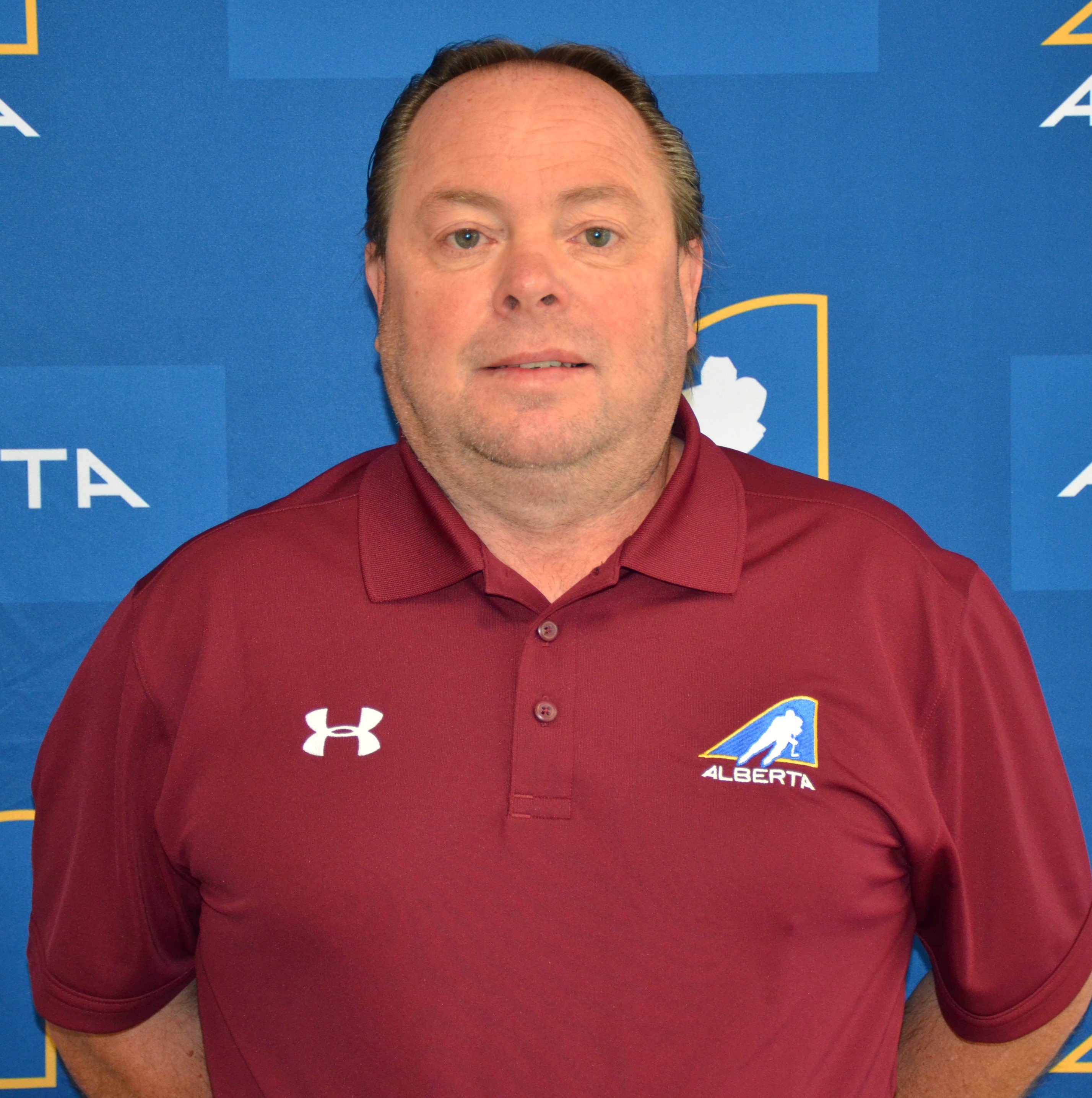 I would like to welcome all new and retuning officials to the 2022 2023 officiating season.  I hope everyone has had a safe and quiet summer and is ready to get on the ice and officiate some Hockey Games. We have started to see some Exhibition games coming in so please make sure you update your availability, Dark days (If using and assigning program) or let your assignor know when you are available.

Everyone must attend a recertification clinic. All NHP, MHP and Level 3 officials must take a Level 3 online clinic.  All Level 1 and 2 officials must take a full day in person clinic that corresponds with your level.  A clinic schedule can be found on the Hockey Alberta Website as well as links for the updated Rule Book. You must register for a clinic using the Hockey Canada registry.  Please make sure you update your HCR profile.  Here is the link to the website. .

Reclassification applications are now being accepted for the 2022/2023 season.  We are accepting applications for level 3 upgrades as well as MHP/NHP.  More info can be found here.  Please have your application in no later than Jan 31, 2022.

I would like to congratulate all the North region officials that officiated at an international or National event this past season.  Your dedication and commitment as well as countless hours on the ice paid off with a fabulous assignment.

I would like to congratulate all the award winners from the past two seasons.  All the awards were presented at our annual general meeting and social.  All the award winners deserve a big thank you for all their commitment and dedication to the program.  With out the countless hours that our volunteers put in, it would be very difficult to have the successful season that we have each year.

I hope everyone has a great officiating season.

Thank you and Stay Safe 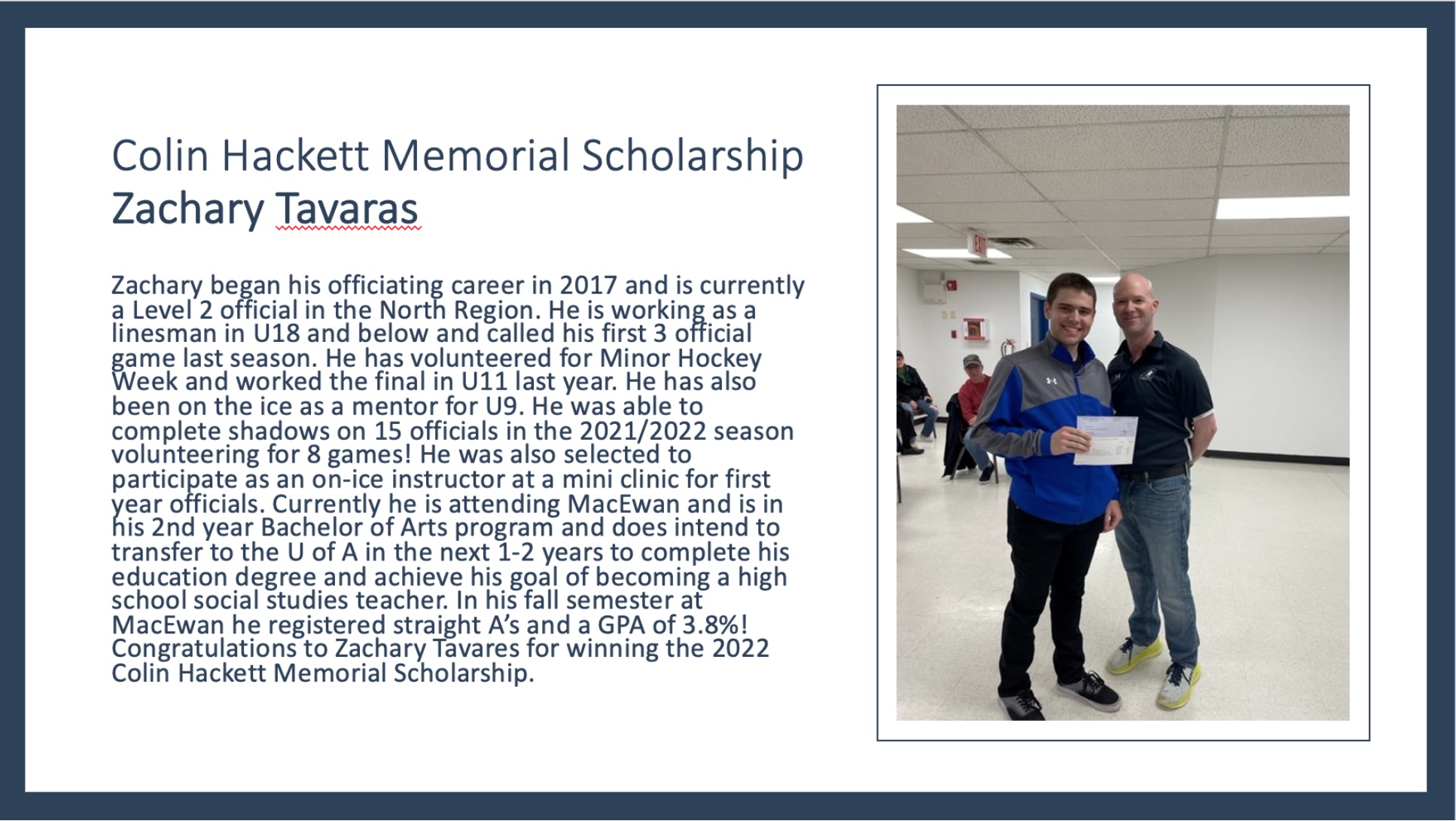 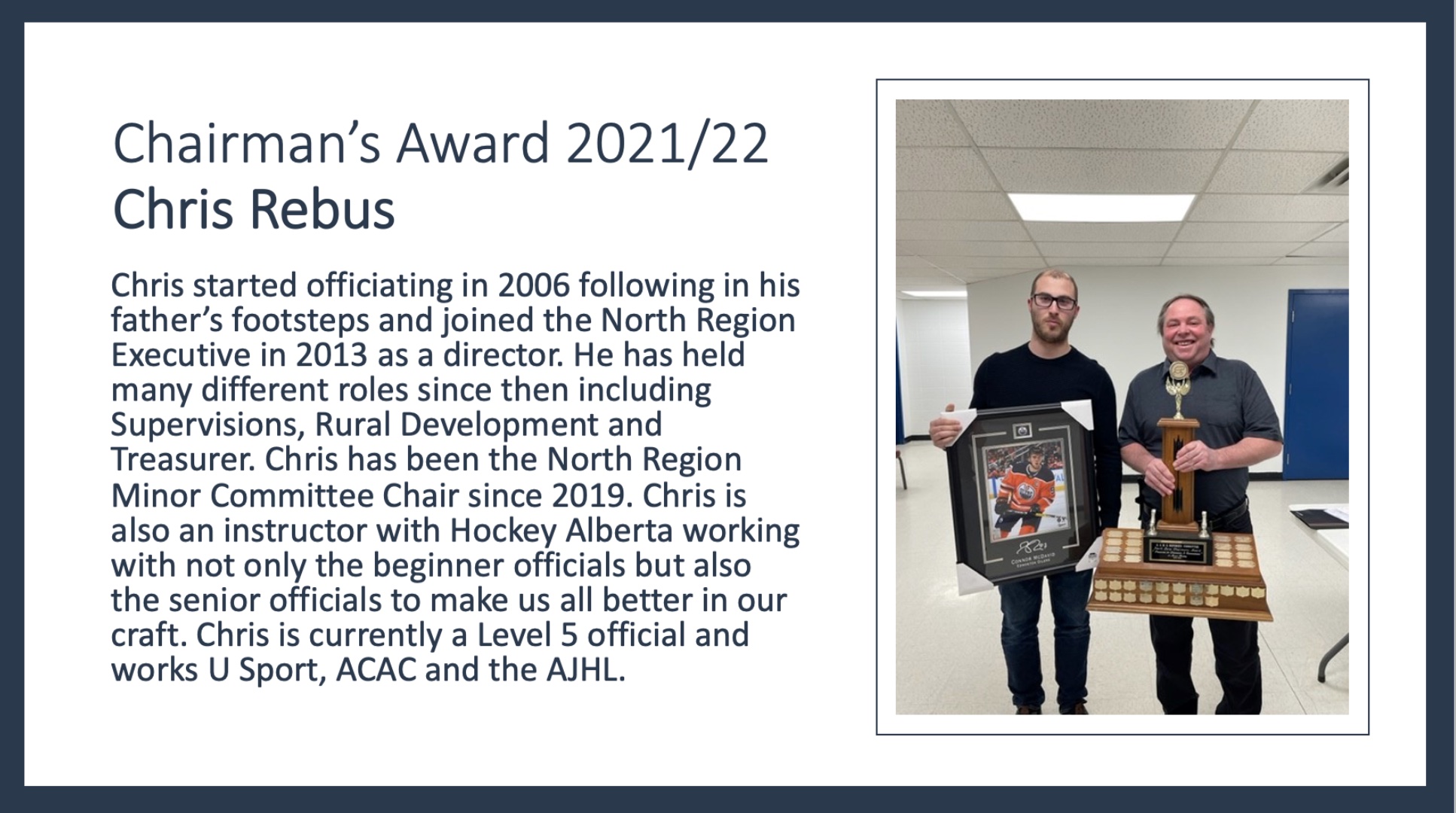 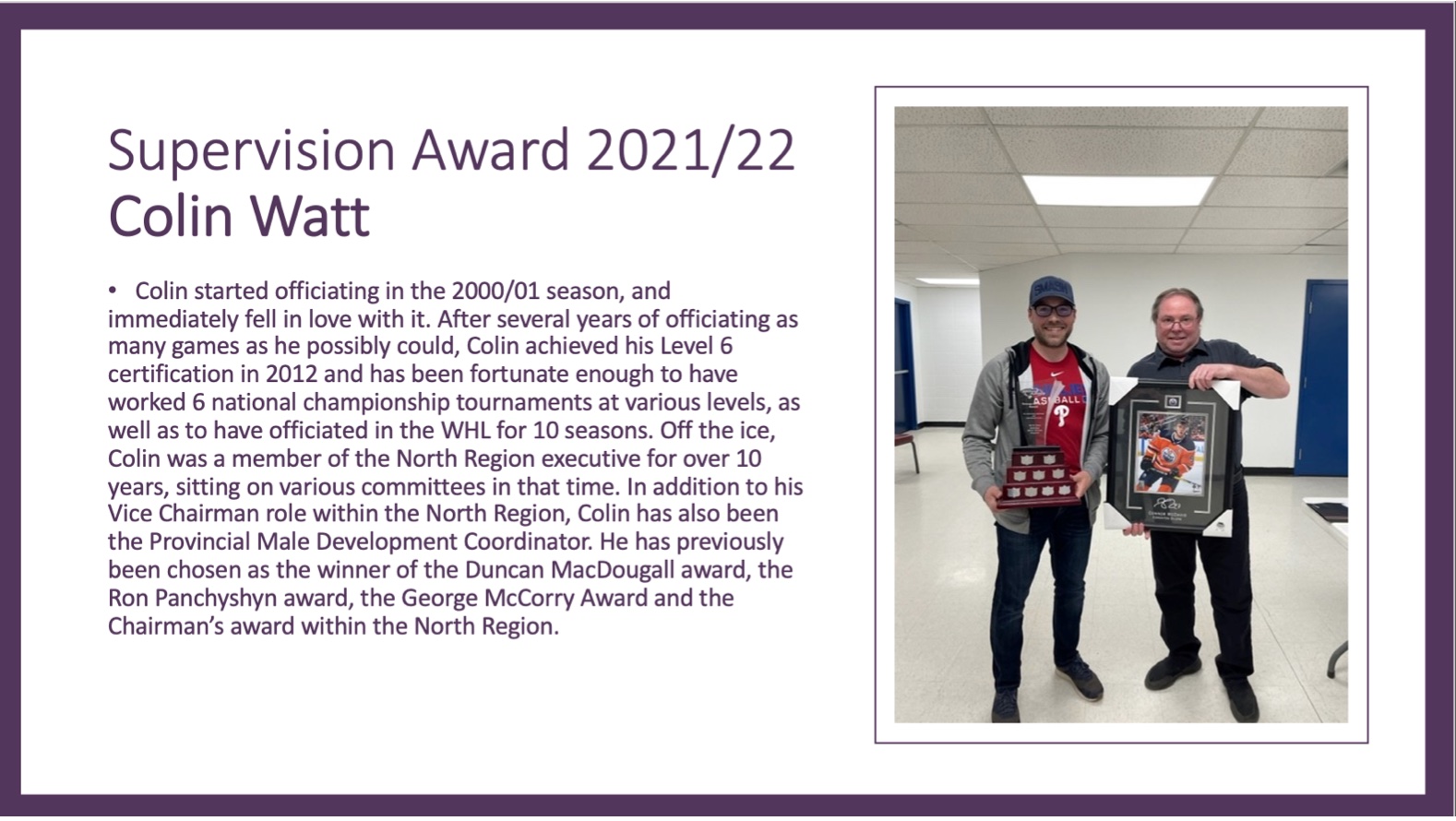 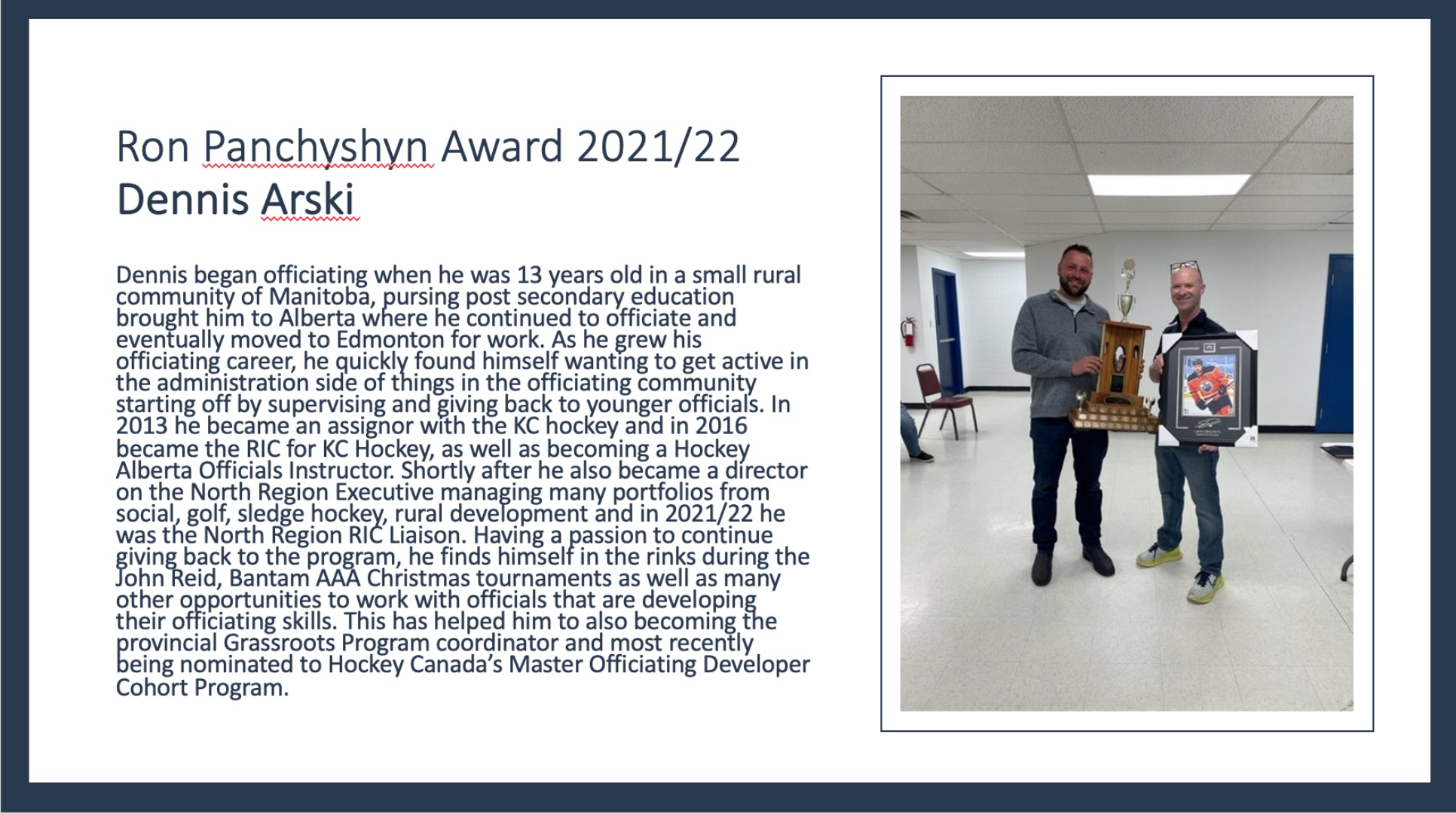 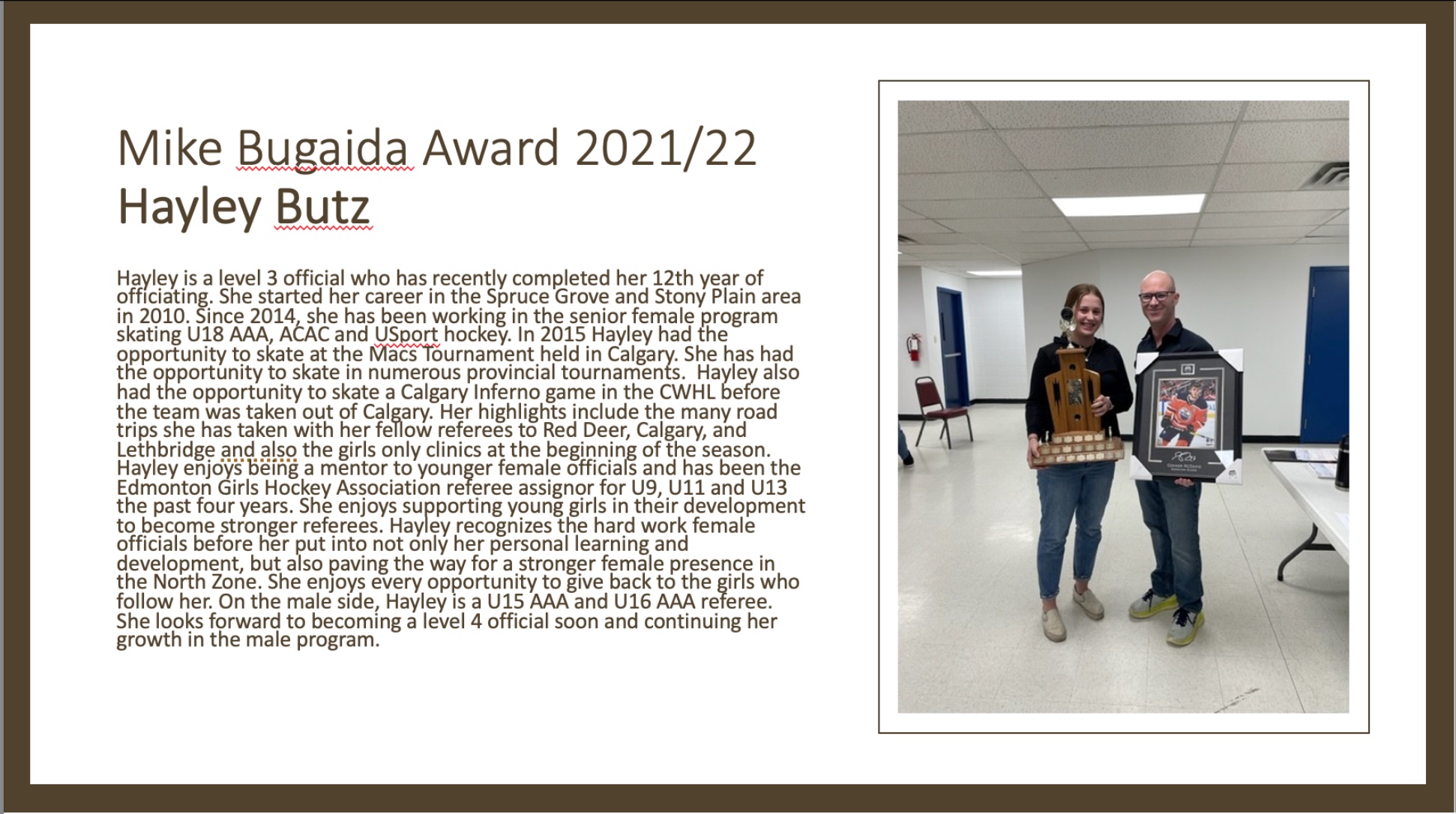 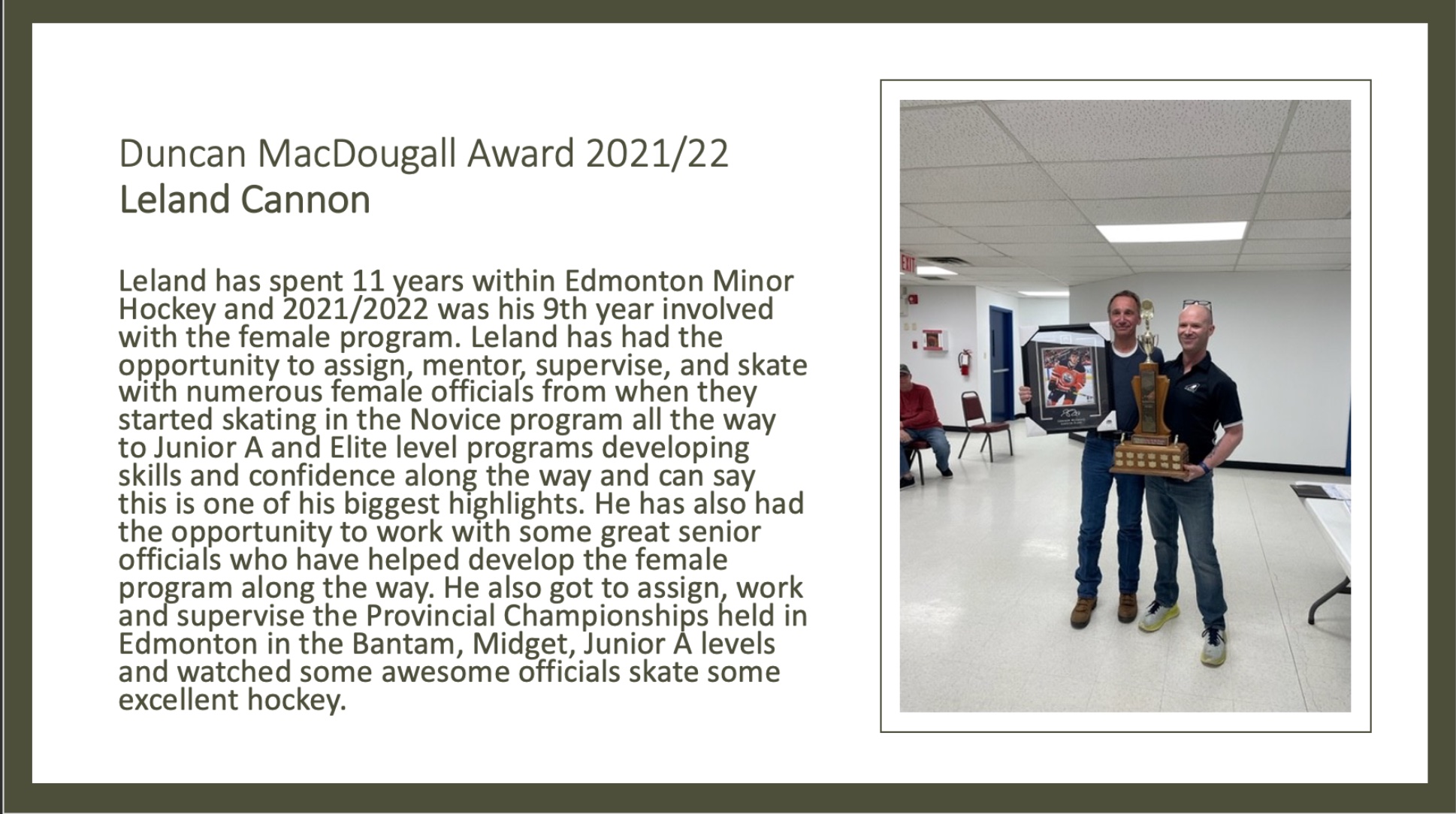 Dean moved to Edmonton in 1976 to begin a new chapter in his life.  Shortly, thereafter, in 1981 Dean moved to St. Albert to raise a family and this move put a pause on his officiating career.  Dean went back to officiating in 1988 working minor hockey in St. Albert for Tony Chieco and Norm Douzzech.

In 1998, Dean followed Derek Herman as St. Albert’s Referee-in-Chief, a position that he held until 2003.  Prior to becoming referee-in-chief, Dean designed a website for the St. Albert Referees.  This website displayed everything happening with referees in St. Albert and the website had links to the North Region and to the province.  Dean was also an integral part of the St. Albert supervision program.

In 2000 Dean was part of a group of Referees-in-Chief from across Canada that designed the Hockey Canada Mentorship and Shadow program under the guidance of Norm Dueck, manger of officiating.  During this time, Dean was instrumental in designing a referee game report form for officials in St. Albert.  This form made it easier for referees to write their game reports.  Hockey Alberta adopted this form for use in minor hockey throughout the Branch.

Throughout his career, Dean worked numerous elite level tournaments, including the 2000 Alberta Winter Games in Sherwood Park and the 1997 St. Albert Bantam AAA Tournament including the Gold Medal game.

For the past twenty years, Dean has been involved the Region executive level and he currently holds the position of Clinic Coordinator.  Coordinating between sixty and seventy clinics each year through the Hockey Canada Registry (HCR) program, Dean creates each individual clinic.  As well he creates a schedule for the clinics in the North Region after consulting with the local referees-in-chief about potential dates.  Dean then assigns instructors to each clinic.  Following each clinic, Dean builds a North Region roster providing everyone in the North Region with a living document.  Dean is also an active instructor.  He does not shy away when asked to help out.

In 2008 Dean became part of the Provincial group responsible for Hockey Alberta referee clinics.  As part of this group Dean was sent to Ottawa to participate in the Master Conductor Clinic by then provincial chairman, Wally Popik which introduced him to the responsibilities of conducting a leadership clinic for instructors.  Dean helped to develop modules and ideas which help our instructors across the province.  The purpose is to have uniform instruction at clinics across the Branch.

During the first few years, Dean, with assistance from local peers, offered to build the national exam for Hockey Canada.  He suggested that the provincial leadership group use a program called Socrative to conduct the exam at each clinic.  Socrative has many benefits including monitoring exam progress, self marking and identifying problem questions.  Dean, upon receipt of the national exam, inputs the exam into Socrative and distributes the clinic codes to the instructors.

In 2019, Dave Ganley retired, and Dean was asked to become an instructor at Branch supervision clinics.  That year clinics were held in the north and the south part of the Branch.  Dean was an instructor at the clinics in both Edmonton on Saturday and in Calgary on Sunday of the same weekend.

Official of the Year: Brayden Arcand 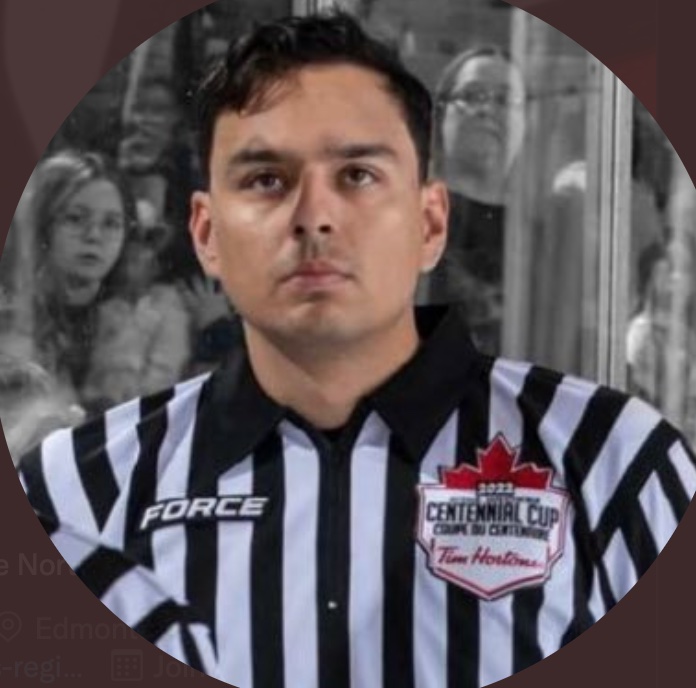 The 2022/23 hockey season is upon us and in full swing. Many of us are officiating as many games as we can, while at the same time planning on getting out to the rink on nights-off to supervise our fellow officials.  While we have different reasons for supervising, it is important to remember that supervisions are an integral part of the development of officials. Since it has been a little while since we have been in the rinks full time, I wanted to take this opportunity to go over a few expectations for supervisors.

· Provide useful information and focus on areas the official can improve. Include feedback on the positive aspects of their game and not just the negative

Officials working hockey assigned by the Senior Assignor are encouraged to read the Supervision Requirements that were distributed earlier this year as they apply to the 2022/23 season. This season, officials will be “assigned” to supervise specific leagues or levels of hockey.

Have a save and enjoyable hockey season, 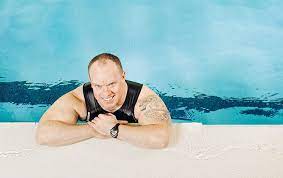 The successful applicant must meet all of the following criteria:

· A member in good standing with the North Region and at a minimum a Level 2 official.

· Resident of the Region for the past season and the current season.

· Attending a post secondary institution in a recognized program on a full time basis (min. of three classes per semester).

· Volunteer experience you have provided as a mentor/leader on and off the ice.

A scholarship committee will select the winner each year. The committee consists of two executive members and one member at large.

The application period is January 1 to March 1 each year. Applications will not be considered received until all the required information has been received by the committee.

Here is a link to the application: Colin Hackett Scholarship application

Scholarships are presented to applicants who meet the following criteria:

·  A member in good standing with Hockey Alberta in the current season with a minimum of Level 2 certification.

·  A resident of Alberta for at least 2 years.

·  18 years of age by December 15 of the season s/he is applying for scholarship.

·  An active official, working games at any level.

·  Attending a post-secondary institution in a recognized program on a full time basis, including a recognized trade school program. Transcript of class enrolment is required.

·  Other criteria will include, but is not limited to, the applicant’s on-ice ability and off-ice contribution to his/her Region.

Application deadline is April 1 of each year.

Applicant could be applying for the year just being completed in order to qualify.

For those Edmonton officials who work in the City AA program or in the Edmonton Federation Hockey League (EFHL) you should be aware that we have moved to a new version of RAMP – Version 2.  This move had a genesis about four years ago.  Since then, there have been attempts to move to a newer version but in testing we always found the newer versions wanting.  Most recently we revisited the process in late March 2022.  In June, the process continued on an almost daily basis and by the end of August, it appeared that everything was in order.  NOT.  There continue to be issues that prevent a smooth transition.  Hopefully, by the time you read this article RAMP Version 2 will be fully operational in Edmonton.  The system has idiosyncrasies that must be learned, and the system will continue to require minor tweaks to allow it to provide the best service for Edmonton administrators, assignors and officials.  Should you experience any issues with RAMP Version 2 please contact your local RIC as it is highly unlikely that you are the problem.  All officials who use RAMP in Edmonton should revisit their personal page and update ALL the data including the year that you started officiating.

This year there will be two co-chairs for the North Region Female Development Program: Shelley Knowlton and Darby Readman. The year is already starting off great as we have females who are very interested in helping out with the committee. Our plan is to begin a supervision program so that there are more consistent supervisions not only with mentor officials but with peers as well. We are excited to have an all female clinic taking place on October 2 at NAIT. Our plan is to also have a supervision coaching session sometime later on in the year. There will be more information to follow.

We couldn’t be happier for these three officials. It is a great opportunity to showcase their skill level and to learn from some of the best officials in Alberta.

We are looking forward to a great year!

If you have any questions please feel free to reach us at: [email protected]

With the season just around the corner, we would like to invite you again to be part of the All Female Clinic taking place on October 2, 2022 at NAIT. The clinic still has many spots open that we would like to get filled. It will be a fantastic opportunity to meet other officials and to learn more about the female program!

This clinic will be for level 1/2 officials. If anyone knows someone who is interested in starting to officiate this year, this would be the clinic for them!

If you have any questions, feel free to reach out to [email protected]

Use this link to begin your sign-up and registration.

Have a fantastic long weekend!

We wanted to start off by introducing ourselves - Shelley Knowlton and Darby Readman - as co-chairs for the North Region Female Officials for the upcoming 2022-2023 season. We are both looking forward to working with each and every one of you!

The two of us, along with a team, will be looking to build a program that has opportunities for growth, progression, supervising, coaching and mentoring. Our goal is to be transparent and create a program that is reputable and fair for every female official.

We will be sending out a “Beginning of the Year” introduction letter in mid August outlining league rules, expectations, supervision requirements and any other important information.

In addition to that, we would like to incorporate the Senior class within the Junior class for some portion of the afternoon. This could be quick one-on-one conversations with each other, a rule book scavenger hunt or just time to talk, meet each other and put some faces to names. We believe that this would be extremely beneficial for the Junior officials so they can hear about some wonderful opportunities that officiating has to offer!

We know that there are half day options for the Senior females, however this would be a great opportunity and if you are able to attend this clinic/supervision session on October 2 that would be awesome!

We are looking forward to working with all of you this upcoming season. If you have any questions, please email: [email protected] Enjoy the rest of your summer!