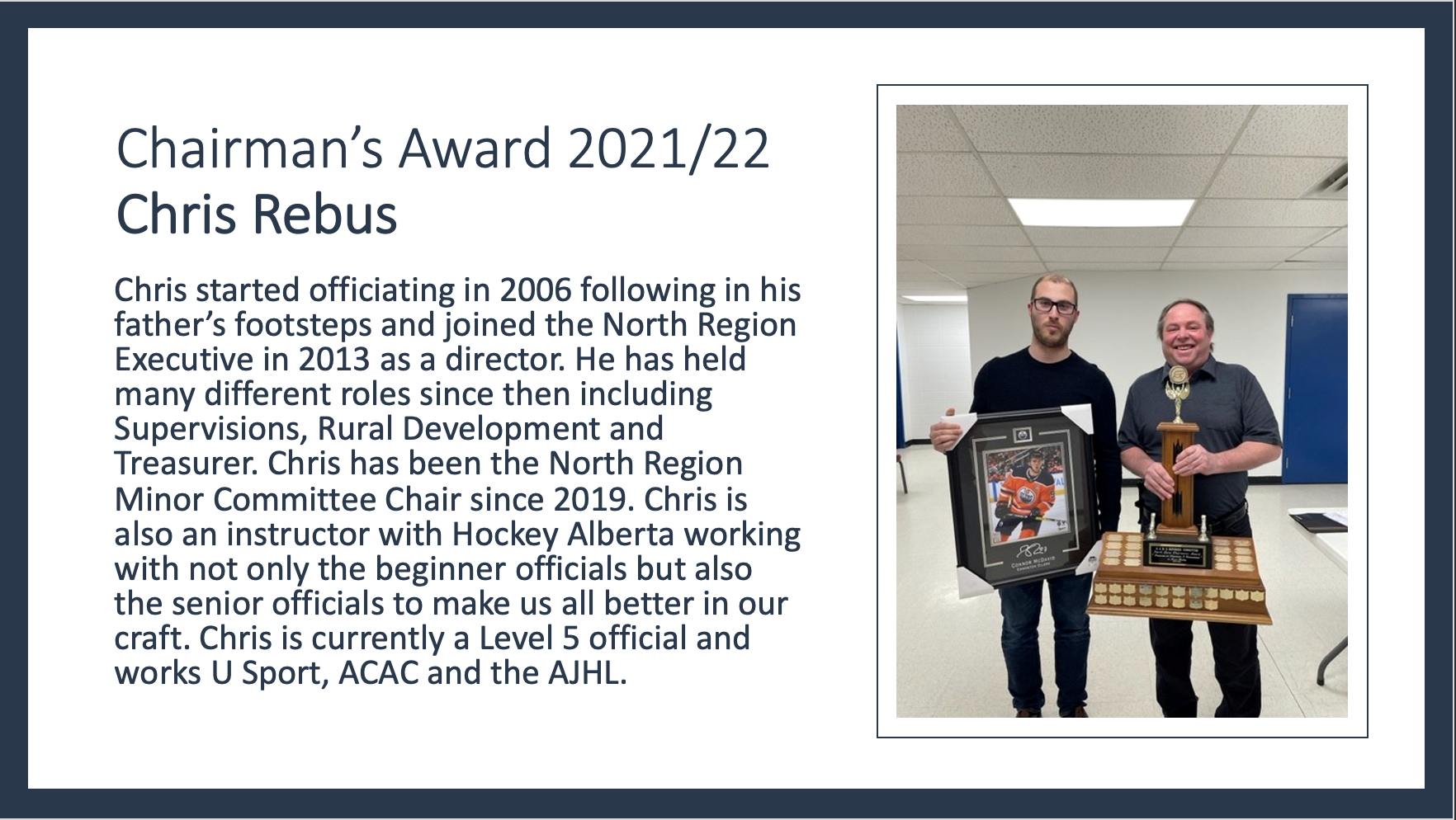 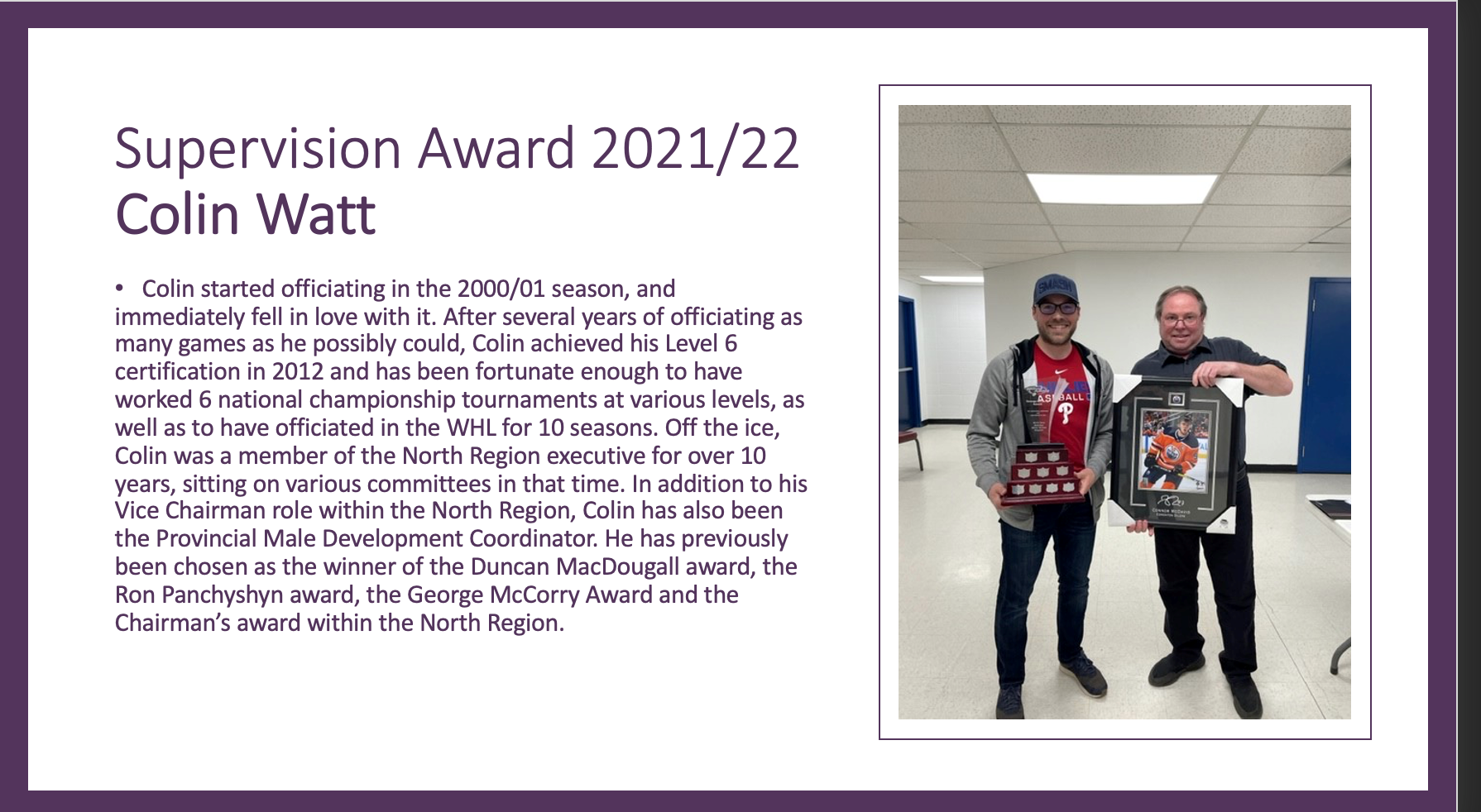 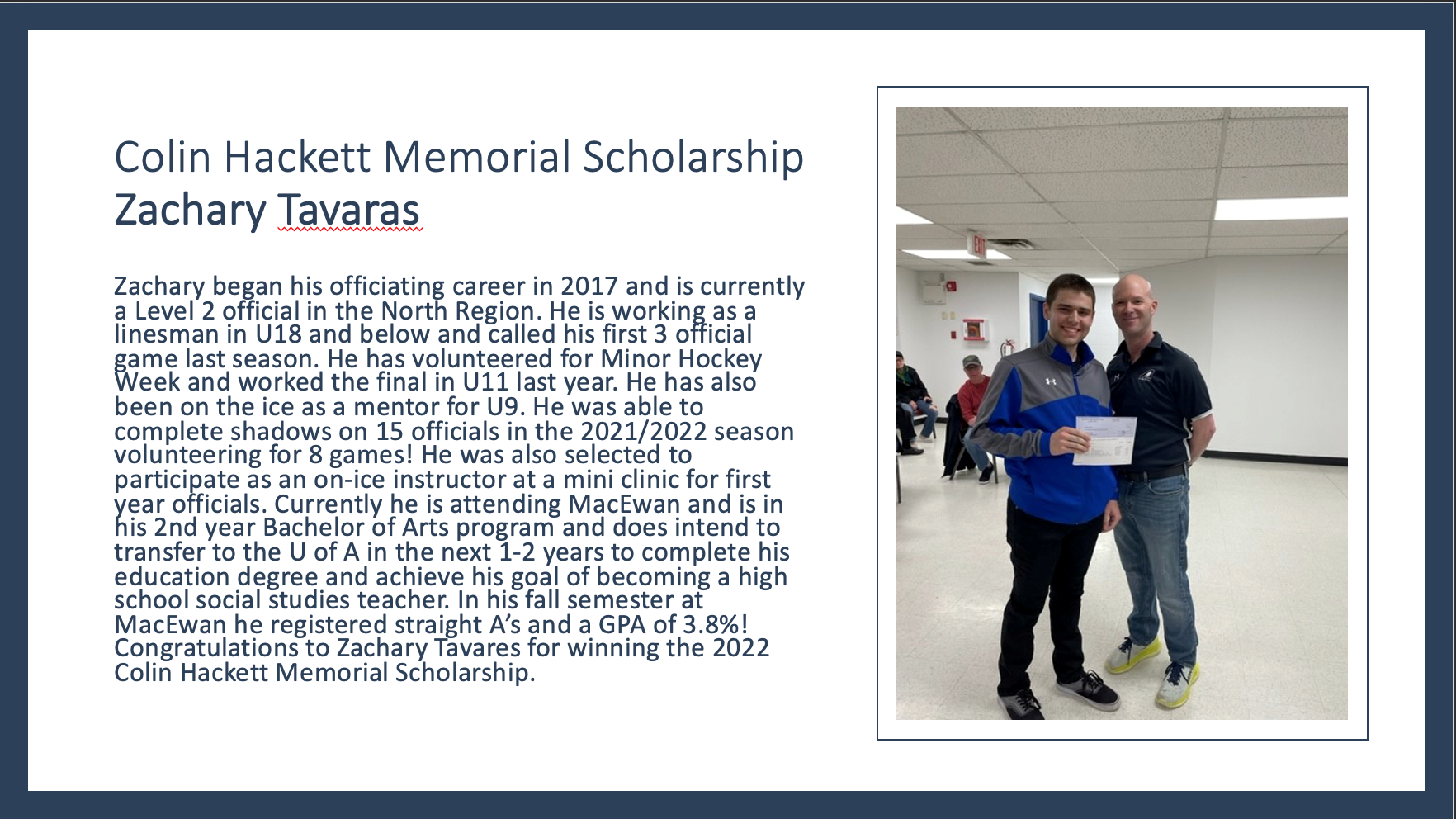 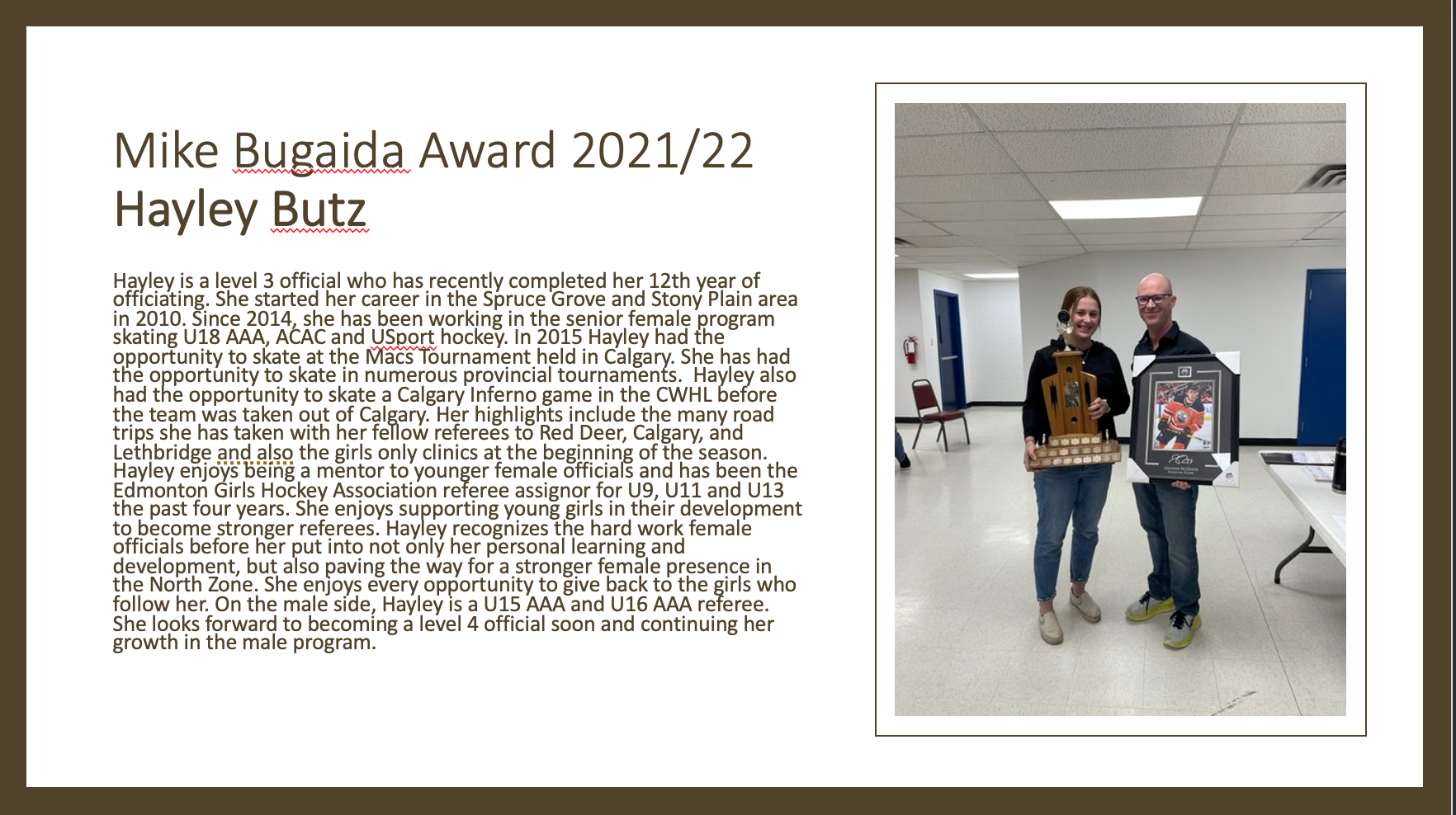 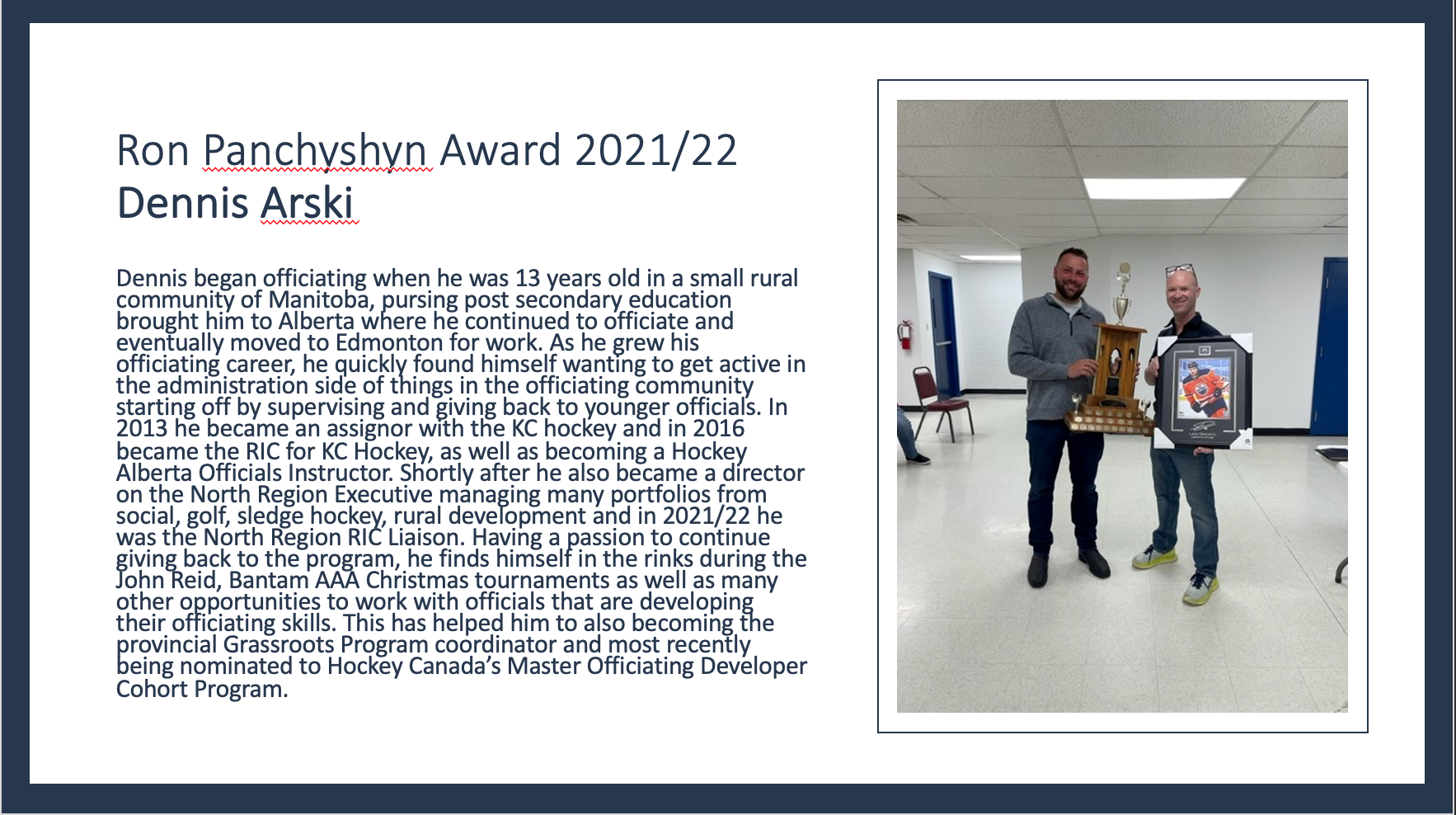 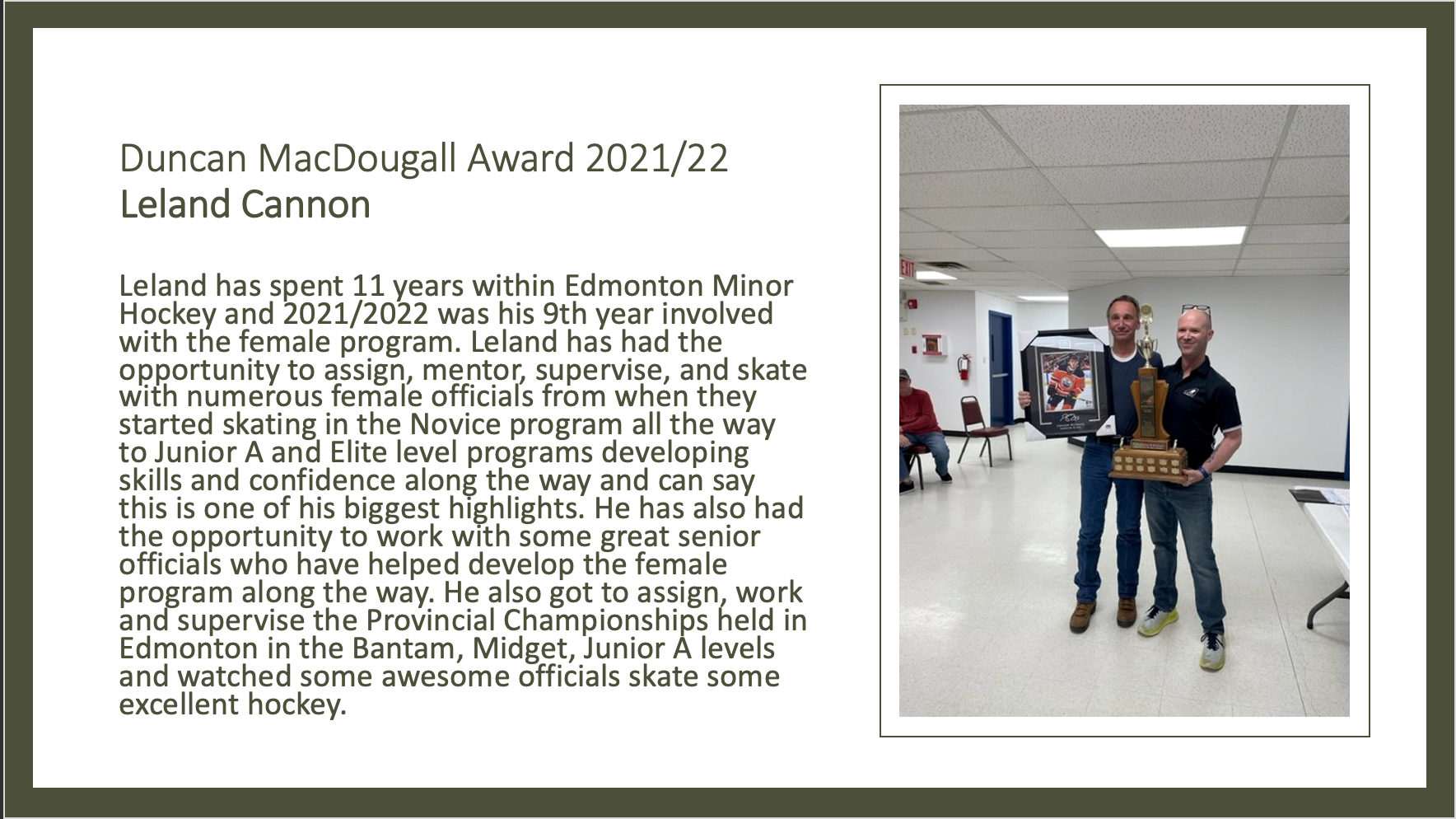 Awards will be handed out at the October General Meeting.

For outstanding service and commitment to the North Region Referee Committee and is least recognized.

Steffen is currently a level 3 official in the North Region who works as a Junior B/Midget AAA referee including at last year’s Mac’s tournament in Calgary. He has worked many games in provincial tournaments and attended the AJHL Elite camp in Red Deer in 2018 and Development camp in 2019. He is currently the Senior assignor for Bantam AAA and Bantam Prep. He was also the co-winner of the Colin Hackett Scholarship in 2020. He is in his final year at McEwan working towards a Bachelor of Science Degree.

For dedication and commitment to minor hockey in the North Region

I coached my son and daughter in Hockey and Ringette for many years, and then was the Director for Midget and Junior C hockey for Calgary NEZ for a few more.

In 1984, I took on a job that involved a lot of travel such that I could no longer make a commitment to coaching. Wanting to stay connected to the game, in 1985 while living in Calgary I went to the dark side and took a referee clinic and went on to register and referee in Calgary for one year.

In 1986 I moved to Edmonton. Living in the west-end, I contacted Duncan MacDougall and started to referee for the Edmonton NWZ. At some point, I also landed up on the KC list. I officiated in Edmonton at the Novice Atom levels at first and then to Peewee and Bantam. I officiated here for four years.

In 1990 I was transferred to Ottawa. While in Ottawa, I progressed to working House League Bantam Midget and Junior C for Kanata Minor Hockey and Bantam AA and Midget AA for Ottawa and District Minor Hockey (ODMHA). It was at this time that I attained my level 3 certification which I still maintain.

In 1994 I moved back to Edmonton. I made the decision at that time that I would not take a spot away from younger officials and no longer work in the “A-program”. I once again contacted Duncan MacDougall and right away started working Bantam and Midget in the EFCL mainly as a caller, and some Junior C as a linesman.

Upon my retirement in early 2006, things started to heat up.

· In the fall of 2006, I took on the job of assigning officials for Peewee and Bantam for NWZ.

· Also, in 2006, I took on the job of co-ordinating the supervision program for NWZ.

· The next year 2007, the EFHL decided to go to the RAMP Assigning system. With my computer background, I was asked to become one of the system administrators.

· In 2014 I took on the job of managing the clinic kits and clinic supplies.

To a female for outstanding dedication to the North Region

Carmen has been officiating in Alberta for 6 years working CIS and Midget AAA as a referee but her favorite level to officiate is Atom. She has been on the ice with Canadian Olympic team as well. She spends a lot of time doing off ice training to increase her strength, speed and endurance. She is a high school teacher, so she gets to ref some of her students which is fun too.

For dedication to the North Region Senior Program

Colin started officiating in the 2000/01 season, and immediately fell in love with it. After several years of officiating as many games as he possibly could, Colin achieved his Level 6 certification in 2012 and has been fortunate enough to have worked 6 national championship tournaments at various levels, as well as to have refereed in the WHL for 10 seasons. Off the ice, Colin has been a member of the North Region executive for over 10 years, sitting on various committees in that time. In addition to his Vice Chairman role within the North Region, Colin has also been the the Provincial Male Development Coordinator for the past 2 seasons. He has previously been chosen as the winner of the Duncan MacDougall award, the Ron Panchyshyn award, and the Chairman’s award within the North Region.

For Outstanding dedication to the North Region Referee Committee:

Chris started officiating in 2006 following in his father’s footsteps and joined the North Region Executive in 2013 as a director. He has held many different roles since then including Supervisions, Rural Development and Treasurer. Most recently he has become the Minor Committee Chair for the North Region. Chris is also an instructor with Hockey Alberta working with not only the beginner officials but also the senior officials to make us all better in our craft. Chris is currently a Level 5 official and works U Sport, ACAC and the AJHL.

For outstanding service to the North Region Supervision Program

Shelley started officiating way back in 1997. She made the leap to becoming an official after spending, what she believed to be, way too much time in the penalty box for “unjust” calls while playing Tier 1 Ladies hockey after making the switch from the male to female game. Since then, she has been lucky enough to officiate in St. Albert which gave her access to every level from Novice to Junior B on the male side and in Edmonton (senior female). She is a level 4 and still skates in the female program, which includes Canada West and ACAC in Edmonton and Calgary, on a regular basis. She has been lucky enough to work several Team Canada and CWHL games (one in Shenzhen, China in the 18/19 season). She has three children, Kylee (18), Chiara (17), and Nash (15), who are products of their environment and have been officiating for a few years now.

She was lucky enough to receive plenty of supervisions over the years which made her the official she is today. That process is not lost on her, so she tries to do at least 20 supervision each season. She feels extremely fortunate to be a small part of a great organization within the officiating community in St. Albert. Great leaders create a positive culture and in turn, a willingness from those involved to step up and give back. She has been privileged to learn with the likes of Joe Becigneul, Arron Best, Dean Ziegler, Derek Herman, Karen Kost, Lacey Senuk (and others) who’s desired to build something better was infectious. Mentorships and Supervisions are the most effective tool we have, to assist officials in their development no matter what level of hockey they skate. The gift of time goes a long way! She loves being a part of the officiating community and assisting in creating the next generation of great officials in the North Region.

Taylor has been an official for 12 years and is an original SAMHA official and is still involved with the development of St Albert officials. Currently he is a level 5 official refereeing in the WHL, USPORT, AJHL and ACAC. He is currently the Midget AAA Liason and Male Development Coordinator for the North Region.

Chris has been an official for 26 years with the last 4 in the North Region. He was the President of the Grande Prairie Referee Association for 4 years and sat on the Peace Zone’s Executive for 15 years. He moved to Edmonton in 2016 and immediately sat on the North Region Executive that year as the Lead Supervision Co-ordinator and held that position for 2 years. This past season he moved into the role of Awards/Rewards and Scholarships. Chris is still active on the ice working as a linesman in Junior B, ACAC Female and CIS Female and also helping out wherever he can in the minor program. He won this award for the Peace Zone in 2012 as well.

Deion has been a part of the North Zone for the past 8 seasons. He moved to Edmonton in 2012 from Lloydminster where he had started his officiating career in 2007. Since moving to the North Zone, Deion has continually been involved in helping out. He started out with instructing clinics and working with the Female program as a senior assignor. He has also been the MAAA liaison for 2 seasons. Currently, he is the referee assignor for the Senior Program. On a provincial level, he has helped as an instructor with the Hockey Alberta Officials Development Camp for the past 3 summers.

On the ice, Deion currently works as a linesman in the WHL, U-SPORTS, AJHL, Senior AAA and a referee in Jr. B. He has been in the WHL for the past 5 seasons and worked the League Finals in 2019. He was also selected to work the USPORTS Nationals in Lethbridge and the National Jr. A Championship in Brooks in 2019.

In November 2016, the North Region lost Colin Hackett, an inspirational mentor and official, after a two-year battle wth colon cancer. Colin became an inspiration to many after his diagnosis, as he would officiate games days after undergoing chemo therapy treatment and continued to mentor younger officials. He also refereed for the World’s Longest Hockey Game while wearing his chemotherapy pack and undergoing treatment during the game. Off the ice Colin gave a motivational speech to more than 2000 people at the Enbridge Ride to Conquer Cancer and then rode for 200 km with the group. During his courageous two-year battle with colon cancer, Colin continued to be a mentor to many officials and volunteered his time as Vice Chair.

The Edmonton Invitational Bantam Tournament of Champions is providing the North Region Officials with a $1000 scholarship to be awarded to an official who officiated at the Bantam level this season. Officiating in the annual Edmonton Invitational Bantam Tournament (EBIT) of Champions would be a plus. The funds will be held in escrow until the official provides the EBIT Scholarship Committee with an official receipt showing proof of registration or tuition payment to a post-secondary education institution. Should the official not provide such and reach the age of 23 years old, the scholarship will be returned to the EBIT Scholarship Fund.

The criteria for the award is:

Please apply to the EBIT Scholarship Committee no later than March 1 of the current season. Nominees may be interviewed.

Only the successful candidate will be notified and the name will be posted on the EBIT and Hockey Alberta Officials website. No individual can win more than one scholarship.