The weekend of July 18-19, 4 Wing Cold Lake in partnership with the City of Cold Lake is hosting the 2020 Cold Lake Air Show. The Air Show will feature the only Canadian appearance of the United States Navy Blue Angels demonstration team as well as celebrate the 50th Anniversary of the iconic Royal Canadian Air Force Snowbirds. There will be 4 hours of air demonstrations and lots of family fun on the ground including a kids zone, classic car display, static displays from both the United States and Canada and much more. You can find the Cold Lake Air Show on Facebook for more information.

A package of four tickets is available to one registered Hockey Alberta official. To enter, fill out the following form:

Hockey Alberta assigns officials to medal games based on performance. For an official to receive the assignment of officiating the Gold Medal game at any level is among the highest honor an official can receive.

Below are the six officials who were selected to officiate the Alberta Winter Games gold medal finals:

Congratulations to all the officials involved in a successful Alberta Winter Games tournament!

For the second straight season, the Western Hockey League, in association with BC Hockey, Hockey Alberta, the Saskatchewan Hockey Association, and Hockey Manitoba, are producing an episodic video series about development as an official. Many different topics will be covered, including nutrition, off-ice presence, and communication. There will also be interviews with current and former WHL and NHL officials. For anybody who is interested in further developing as an official, or even is just curious about what goes into officiating at the top levels, it is highly recommended you check out this series.

See the entire series, including the seven episodes from the 2018-19 season here.

EDMONTON -- Edmonton’s Minor Hockey Week has been running for nearly six decades, but organizers say they’ve never had three referees from the same family all take charge of the same game...until now. 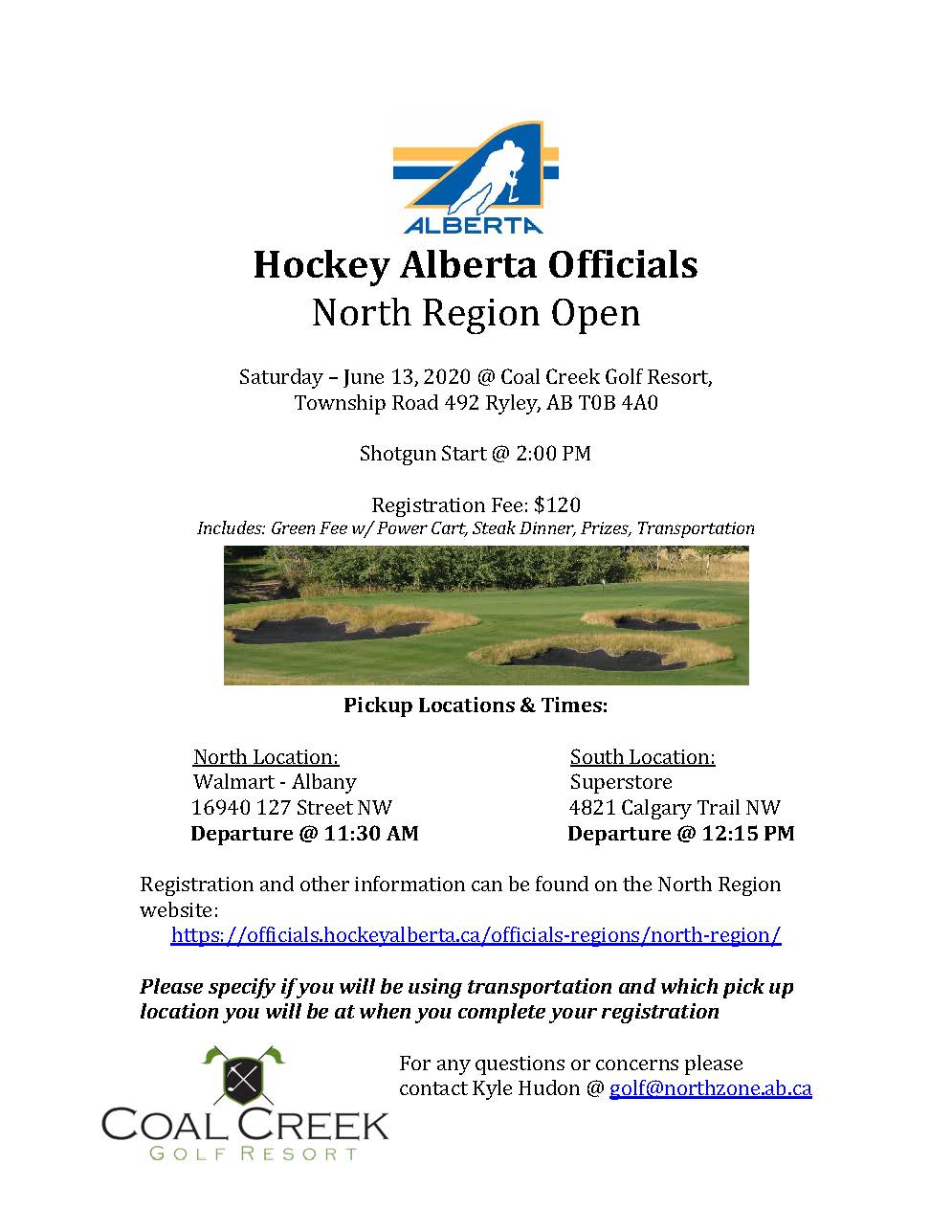 The 2020 Hockey Alberta Officials North Region Open golf tournament  will be held June 13 at Coal Creek Golf Resort near Ryley, AB. The event includes a shotgun start at 2 pm and registration fee is $120 Included with your entry:

If you have any questions please email Kyle Hudon.

CHAD HUSEBY RECENTLY RETURNED FROM THE IIHF WORLD JUNIOR HOCKEY CHAMPIONSHIPS, AND REFLECTED ON HIS TIME IN THE CZECH REPUBLIC.

Recently I had the opportunity to represent Hockey Alberta, Hockey Canada and the Western Hockey League on the international stage at the 2020 World Junior Hockey Championship in Ostrava, Czech Republic.

This was a once in a lifetime opportunity and it is something that I will truly never forget.

My journey started on December 23 as I made the long journey to the Czech Republic. Upon arrival in Ostrava I was introduced to the rest of the officiating team, along with the IIHF officiating coaching staff that was assigned to this event. Twelve referees and 10 linesmen along with four officiating coaches and the IIHF officiating manager is what made up the 11th team of the tournament. This team of 27 was very diverse with officials and coaches coming from eight different countries. It was extremely special to sit in our meetings on Christmas Day as we prepared for what we were facing in the coming days. We all come from different backgrounds and different styles of game play but for the next two weeks we knew we would need to trust each other and work together to serve the game and the tournament as best as we possibly could.

The games and the atmosphere around the games was amazing! They do hockey differently in the Czech Republic, the games have a party atmosphere that is tough to match in North America. That made being on the ice and being in the stands special. The tournament was very well attended and the people in Ostrava love the game of hockey! It was amazing to see how many Canadian fans made the long journey across the pond; it was very cool to be part of a tournament that means so much to Canadians.

I ended up having a very successful tournament and was fortunate enough to work seven games in total. I worked four games during the round robin and then was assigned to work a quarter-final, a semi-final, and then ultimately the bronze medal assignment on the final day of competition.

I feel extremely thankful for this amazing opportunity. Every game we had a detailed supervision from one of the officiating coaches as well as detailed video work that helped us as we moved throughout the tournament. I know that officiating always seems to be a topic of discussion at these events, but after having been to one and having seen the work that the IIHF and the officiating team puts in behind the scenes I can tell you that I couldn’t be prouder to be part of the 11th team at the tournament and I am proud of the work that we did.

I would be remiss not to thank my wife Lindsay for her support, having four young children, it was a huge sacrifice for me to leave for 2 weeks at the busiest time of the year. I also need to thank Hockey Alberta, Brett Kelly, and Curtis Nichols for their continued support. It was awesome to work with the other Alberta official, Fraser Lawrence, in all three of my playoff assignments. I feel like we were able to show the world the level of officiating that this province produces.

Celebrating our officials at the Saddledome

Hockey Calgary, the Calgary Hitmen and the Western Hockey League (WHL) got 120 young referees and linesmen onto the ice at the Scotiabank Saddledome before Christmas as part of Officials Appreciation Night. The event included an on-ice session with WHL officials and a classroom session with Hockey Alberta’s Central Region Officials Committee. Check out the video of the event, courtesy of Hockey Canada.